More article in the group

On the condition that the current balance in the user's account is sufficient to support the position, the user can adjust the amount of the margin according to their preference, including both increasing and reducing.

Users can tap the 'Margin Amount' on the position page and tap in the amount to adjust the margin as shown in the following screenshot: 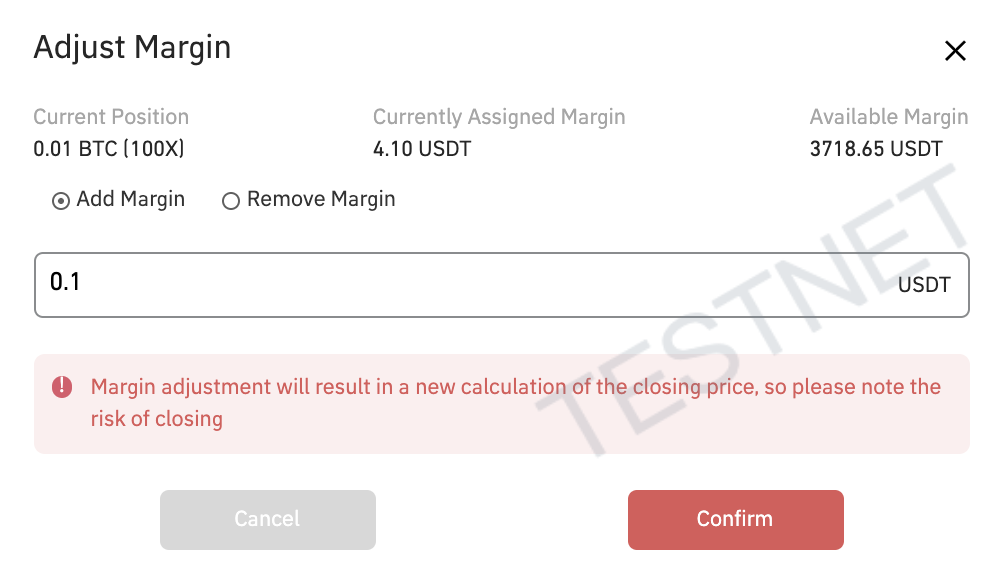 Users can remove the margin at most when the leverage is not yet adjusted.

When making profits, users can remove all margins. When losing, the removable margin = margin transferred in - unrealized PNL ( If the position has been adjusted, users will also have to take the fee for position adjustment and etc. )

*Note: 1） Users need to pay attention to the changes in liquidation price while adjusting the margin and to prevent a forced liquidation. 2） If a user changes the leverage after adjusting the margin, then the adjusted margin will invalidate, and will have to recalculate the margin according to the current leverage. 3） Users need to make sure the leverage margin is sufficient before reducing the margin, or they can also reduce the margin by increasing the leverage. In the meantime, users will also have to make sure the margin is sufficient before reducing the leverage, or else it can be adjusted. 4） Adjust the margin before adding positions. The margin will be shared and won't invalidate. If reducing positions, then the margin will be reduced according to the proportion of ADL. 5）Margin adjustments in cross margin mode are made in the positions. In isolated margin mode, users can transfer funds directly to the contract account.